A Path to a Career in Medicine 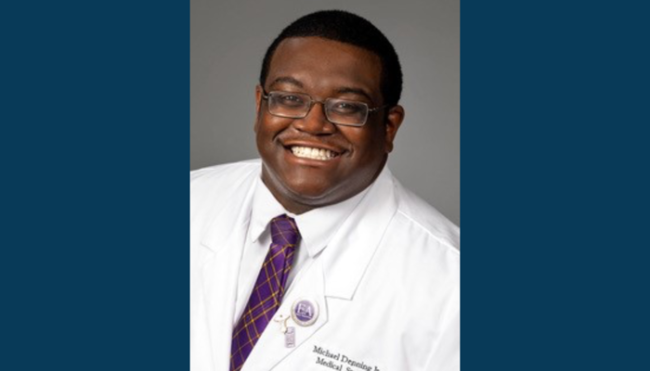 “Wake Tech always provided me with the tools needed to excel in my academics.”

Michael Denning is pursuing a career as a doctor and his impressive path to medical school started at Wake Tech when he was just 14 years old. As a student at Wake Early College of Health and Science, Denning took college-level classes and graduated with a high school diploma, Associate in Arts and Associates in Science degrees, and a Nursing Assistant certification was well.

Michael says, “I’m always grateful for the foundation that I got at Wake Tech. Whether it was through sitting in the classroom with older individuals as a high schooler and learning how to navigate higher education in general, or to be able to take the classes for free through the Wake Early College of Health and Science program, Wake Tech provided a lot for me.”

After Wake Tech, Denning transferred his credits to East Carolina University, where he leveraged his Wake Tech experience to the fullest. He credits his nursing assistant certification and letters of recommendation from Wake Tech professors with helping him score ECU’s EC Scholars Award, which granted him a full ride to the university. After three years of vigorous work, Denning graduated from ECU with both a Bachelors in Public Health Studies and a Masters in Business Administration. After that, it was an acceptance to the prestigious Columbia University in New York to pursue another master’s degree – this one in Public Health with a concentration in Epidemiology. He graduated from Columbia University in May of 2020 and came back to North Carolina to pursue his Doctor of Medicine (MD) at the Brody School of Medicine at ECU.

With several degrees under his belt and an MD on the way, Denning has earned many career opportunities. In fact, when asked what he wants to do in the future, he responded with “everything!”

Clinically, Michael would love to be a pediatric surgeon or a pediatrician specializing in caring for child abuse victims. “If there’s any way I can help kids, whether it’s through the surgical process or just support as a pediatrician, I want to be able to do all I’m able,” he says.

Eventually he would also love to utilize his MBA in the medical field to secure a leadership role in healthcare management. His ultimate career goal? To become the Surgeon General of the United States.

Denning credits Wake Tech with providing a thorough foundation on his road to success.

“In high school, I was taking classes with students who had already graduated high school or were coming from the workforce – individuals who were not the same as me but were working towards the same goal of graduating and learning,” he says. “That really showed me the value of higher education and prepared me for larger campuses.”

Denning says the two most influential parts of Wake Tech were the people and the resources. The people, whether it be the faculty or the students, encouraged him, pushed him, and fought for his success. Michael says, “My professors didn’t just care about the subject we were learning; it was about us being successful people as well.” He also credits resources like the tutoring he received at the Individualized Learning Center (ILC) with helping him succeed. .

“I never felt a lack of resources or support” Denning says, “Wake Tech always provided me with the tools needed to excel in my academics.”