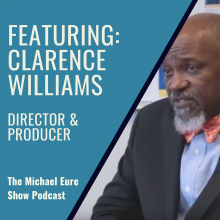 In this week’s episode, Michael welcomes Peabody Award- and Emmy Award-winning producer and director Clarence Williams. Michael will discuss Clarence’s experiences as a producer at Capitol Broadcasting Company, as well as his experiences in the military and volunteering in the community.

Clarence Williams, director/producer, had the distinction of being the longest-tenured employee at Capitol Broadcasting Company for many years.

Clarence directed award-winning newscasts, live sports coverage, public affairs programs and special projects and changed the way college coaches' shows were produced by moving the production away from the studio environment to being produced on location. Clarence directed/produced/edited N.C. State coaches programs, including "The Jim Valvano Show," which became the standard for other coaches and broadcasters to use across the nation.